Cleanliness is next to godliness

With the COVID-19 pandemic, the theme of purity and purism in language takes on a new meaning. Therefore, we are publishing the article about the lecture held by Snježana Kordić in Sarajevo in February 2018. The text was originally published in German on the website of the Swiss publishing house Mille et deux Feuilles in March of the same year.

On linguistic and other kinds of purity

On International Mother Language Day, February 21st, journalists love to talk about how literate we are. They talk about the importance of nurturing our language and keeping it safe (how else to translate očuvanje?). Based on what you can read and hear in the media on this and similar occasions, that is the broad public perception on language. Schools, media and writers ought to celebrate our language, nurture it. Linguists ought to keep it clean. But, who are we protecting the language from? Or, who is making it dirty? Nobody remembers to ask.

Five days after the Mother Language Day, at the Faculty of Philosophy in Sarajevo, Snježana Kordić held a lecture “Language as a Means of Ideological Propaganda”. Professor Snježana Kordić is renowned for her study “Language and Nationalism” (2010), where she proved purism to be a tool of nationalistic propaganda in Croatia. The title of the book was used for the regional project Languages and Nationalisms that resulted in the Declaration on the Common Language.

One of the language paradoxes she highlighted in the book and at this lecture is the fact that the most “Croatian” words, words Croatian linguists promote, are those that nobody uses. Purism leads us to the point where we are supposed to talk in the way linguists instruct us to, and not the way the majority of the speakers actually speak.

To prove her point, she recounted a story about the linguist Dalibor Brozović who bragged about sitting down and inventing new Croatian words, but then complained that Serbs start using every word he invents. As we can see, purism serves two purposes. To make us believe there was a golden age of our nation when our language was pure, uncontaminated. Secondly, by inventing new or reusing old words we make ourselves different from our neighbours. To be a true Croat, turns out, means not to be a Serb.

Once, I was invited to a local TV’s morning program for International Literacy Day, and the host asked me to comment on the language used in the segment they had just shown. The journalist had interviewed people at the open market about the price of their vegetables and I was supposed to list their mistakes. What? Acknowledge their lack of education and insufficient reading?! Instead, I talked about code switching and different registers. But, apparently, as Snježana stated, some linguists do comply. At the Croatian national TV station, after the afternoon program, two professors in the studio regularly comment on how guests and interviewees use the language.

From purity to fascism in two steps

From talking about purity, we get to fascism in a couple of steps. Take a simple, naive web article as an example, “Study Reveals Hand-Washing Habits of Europeans,” published by the research association WIN/Gallup International. The survey question was: “Do you wash your hands with soap and water after going to the toilet?” The article found its way to my Facebook feed because Bosnia and Herzegovina was the winner of the poll. 96% of Bosnians and Herzegovinians wash their hands after using the toilet. Swiss, if you want to compare, 73%.

What kind of debate could this survey serve? To talk about health? Manners? No. Comments under the article were about race and religion. One starts with the statement: “Proud to be Portuguese” (sic!). The other gives an explanation: “Most people in Bosnia are muslim...and that is why they have a greather sence for hygien than most of the european countrys…” (sic!) The rest questioned mistakes on the map.

Ok, I do wash my hands with soap and water after using the toilet. At home. In restaurants, sure. In cafes and pubs, however, it is a lottery whether they will have toilet paper and soap. Shopping malls, forget about it. Public spaces? If you are a doctor or a teacher, and you have a key, yes, you can wash your hands. Students and patients, they surely have handkerchiefs and wet towels… To conclude, I have no idea how they got those numbers.

As Marry Douglas teaches us, the purpose of purity is to maintain order in the society. Growing up, my sisters and I were taught to wash our hands before eating, not to go to the toilet during the meal, to wash, scrub, polish, clean, wipe everything there is to wipe in the house, take off our shoes and put them on in front of the house, flush our clipped nails, not to leave crumbs all over the place, and shower when electricity is cheap. My twin brother was taught the same rules, minus the washing, scrubbing and polishing part. Women do that better, as the self-fulfilling prophecy would say. However, rules of cleanliness apply only up to the front door. Let others worry about their own homes.

But, the rules no longer make sense to me. If I keep my house clean, and I get rid of the cockroaches (that are often called bubašvabe or rusi. Rascism in its purest form.), they will just go to my neighbour, and eventually, they will come back. Keeping my home impeccably clean might convince my neighbours everything is OK, but it will not help me deal with whatever problem I am trying to scrub off with the dirt. 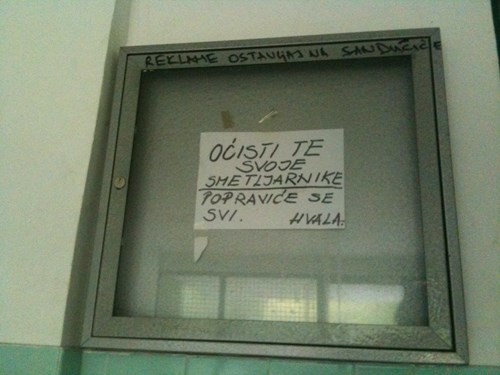 Snježana Kordić proves over and over again that nationalistic ideology is what drives the efforts to purify language by inventing some words and prohibiting others – the same ideology that convinces people in the Balkans that we speak (four!) different languages despite the common sense and the fact that we perfectly understand each other. What do Bosniak nationalists say to that? A couple of days after the lecture, in their propagandist pamphlet, which they try to pass off as a weekly magazine for politics, society and culture “Stav”, they denounced Snježana as Nečastiva, the Satan (in feminine gender!) herself. The list of her wrongdoings is not very long, it fits into their title and lead: She once again negated the existence of the Bosnian language (sic!) by promoting language hegemonism (sic!) and comparing the BiH Constitution to Hitler’s laws.

Even though people say they only care about how clean their house is, the fact is you always compare it to your neighbour‘s. And when you look at the different nationalisms, you see they are all the same. Fragile. Without the order and Others as the enemies, it simply falls apart. Be the Other another nationalism, or a woman who speaks up against it.

Photo (Clean yours garbage containers; Everybody will follow. Thank you) by Nenad Veličković

Graduated from the Faculty of Philosophy in Sarajevo: the Department of Bosnian, Croatian, Serbian Language and Literatures of the Peoples of BiH as well as the Department of Comparative Literature. She works as a proofreader and teaches BCS as a foreign language. She is interested in feminist linguistics and enjoys explaining why grammar makes sense.