How I learned I was a social entrepreneur 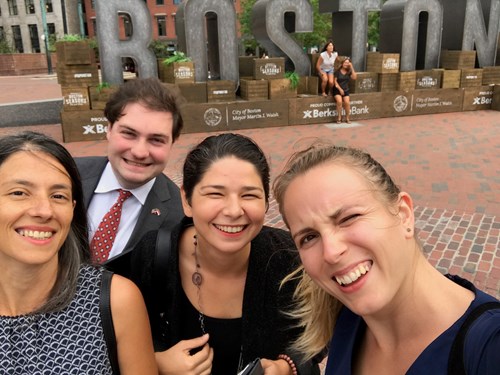 Can you tell me your unique selling point? Is there a difference between incubators, accelerators and hubs? Do you know your metrics and revenues? What is venture capital? Angles? What about customer experience or culture code? Are you starting up, or scaling up? What does it mean to exit the company? I didn’t know the answer to any of the questions. In fact, I didn’t even know how to pronounce entrepreneur the first time I bragged about being selected as one for the Young Transatlantic Innovation Leaders Initiative 2017.

Oh, what things I’d end up learning in two and a half weeks in the States! And, more importantly, the people I’d end up meeting.

Most of the 50 fellows I met in Washington DC in September seemed to be familiar with the business jargon, they had already exited companies and had the “Bible of entrepreneurship” in their little finger. And they had all seen every single Shark Tank episode on YouTube. The question we were asked on our first day of the orientation – Do you have value that people would buy? – rubbed me the wrong way. I have knowledge to share, not to sell.I soon found out my innate shyness and modesty didn’t fit into the American model of pitching and “selling yourself”.

The key to a great pitch is to make it personal, to make it engaging for others who are listening. That’s why my plan for the following two weeks in exploring the entrepreneurial ecosystem in Boston was: to meet new people, engage in conversations and practice my pitch.

The first event I attended during Boston Startup Week was the keynote speech by Brian Halligan, CEO of HubSpot. He made a point that starting a company nowadays was easy, but that the real challenge was to keep it going and scale up. He compared the costs of starting a company ten years ago and today. I kept thinking how these numbers were not relevant to my experience.

I come from Sarajevo, Bosnia and Herzegovina. This year it took us two months just to change the address of our company. We waited for a month for the Ministry of Justice to change our statute, and only once we had that document could we change the address in the post office, the tax office, the office for statistics, the other tax office, and finally the bank. It didn’t cost money, but time and sanity. That was one of the reasons why my colleague Lejla and I gave our city a mere passing grade when we discussed entrepreneurial ecosystems of our hometowns. Our neighbours gave Belgrade a high grade of 6 (out of 10).

The business jargon (and not the Boston accent!), big numbers – hundreds of employees, millions in revenues – at the BSW were all out of my league and interest. Until I joined a roundtable Running a Social Entrepreneurship Startup in Boston. There I met Michelle Cove, founder and executive director of Media GIRLS, a program that teaches middle-school girls and young womenhow to harness the power of media for positive change. In their mission they state: Media, not girls, needs a makeover. Spot on! Even though she did discuss funding and talked about money, the point was in bringing about social change. Making the world a better place. That was the moment I realised I could relate. I was, after all, a social entrepreneur!

Yes, I do in fact have a value people should spend their money on. Pitching as a means of “selling yourself” suddenly turned out to be a lesson in how to get your message across.

My colleagues and I started Association “Lingvisti” with the motto - we can get a job fresh from school only if we create one. That was twelve years ago, when I started teaching Bosnian, Croatian, Serbian as a second language. My first students were from the Netherlands and Brazil. During my first class, I realised I wasn’t able to explain how grammar worked, despite the years I spent studying the grammar of my native tongue. You know, in English you would say 1 night - singular, 10o1 nights - plural, whereas in BCS it’s 1001 night - congruence over logic.

Over the years I found the existing textbooks to be full of stereotypes and gender bias, with dialogs you would find useless in everyday life. Now, I have friends, former students, from all over the world, from Japan to Brazil, and I have assembled the material I need to design and publish textbooks for all levels, from A1 to C1.

To learn a new language you don’t need to know how grammar works. You need to meet people and talk to them.  I believe language is a means of communication and a way to understand each other. Therefore, I am wholeheartedly dedicated to fighting against the use of language as a means of ethnic division and indoctrination.

I used this pitch to meet new people in Boston: teachers, university professors, translators, poets, other social entrepreneurs. I enjoyed discussing education and politics with them. The culture of networking and artistic collaboration in the States made it so easy to meet new people. It was a joy to engage in conversation even for someone as introverted as me. And you know what, from talking to others, new ideas were born. Since my return to Sarajevo, I have started three different projects!

It’s all about the people

Moreover, I realised Lejla and I underestimated the Sarajevan ecosystem. We were judging it from a bureaucratic point of view and bemoaning the lack of political vision. We totally neglected the people. The people who started the first accelerator networking space in Sarajevo, the people who started regional conferences on innovation, all the young innovators presenting their ideas here and abroad, IT experts working on making our buildings, and eventually our city, smart, women’s organisations supporting women entrepreneurs in rural areas, etc. To be a leader, I learned, you need a vision, and a network of people. You need, for example, a friend who happens to be a former student, who makes you apply to the call for young leaders and entrepreneurs knowing it would be just the thing for you, although you don’t quite believe it at first. To grow personally in order to scale up professionally.

Graduated from the Faculty of Philosophy in Sarajevo: the Department of Bosnian, Croatian, Serbian Language and Literatures of the Peoples of BiH as well as the Department of Comparative Literature. She works as a proofreader and teaches BCS as a foreign language. She is interested in feminist linguistics and enjoys explaining why grammar makes sense.